On our flight to Luxor we were over the Mediterranean, the stark desert landscape and the green pathway of the Nile. In hazy conditions and at 31,000 feet we were unable to see the pyramids near Cairo on our way to Luxor.

We soon were at the Winter Palace overlooking the Nile River.  In the hot 108 degree weather, a slight breeze helped slightly and drinking plenty of water was critical.  A relaxing one hour sail on a felucca, the traditional sail boat in Egypt, we drifted towards Banana Island and Crocodile Island a few miles upriver. Sailing on the Nile gave an interesting view of the city.  Our tour guide, Bahaa was most informative as we learned of ancient history. As an Egyptologist, Bahaa, was the director for the Tutankhamun Exhibit for the Pacific Science Center, in Seattle, WA. 2012-13.

Security is important here…as we sailed we first noticed our tourist armed security who actually accompanited us everywhere since our arrival. Plus, two 2-manned military zodiac boats trailed our sailboat on the Nile. Sa’id, our security man, was wearing a vest which nearly concealed his MP4-submachine pistol. (For added measure he carries a 30 round spare clip in his left rear pocket). 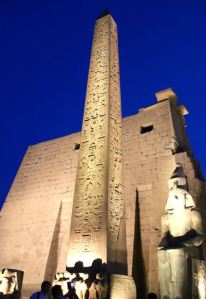 The first evening we experienced the Luxor Temple with its rows of multiple sphynx, the columns, the obelisk (the matching  obelisk is at Place de la Concorde in Paris) and statues to name a few. This ancient Egyptian construction is a continuing archeological reconstruction project. Luxor is a depressed area after the failure of the Arab Spring, 2011. Agriculture and tourism are their main source of economy. Currently, tourism is only 10-15% from what it was pre-2011. Most cruise boats are out of commission and slowly deteriorating.  It was eye opening to see the poverty of these people and we left with a inner saddness for them.  Whatever help we might have contributed to their economy–it will take them many decades to recover.  When late evening temperatures drop to 90 there were many people out in creative ways–many small motor cycles (we witnessed a few single motor bikes that carried a family of 4-5)!!