0415 wake-up call to transfer to the world’s largest Buddhist Temple: Borobudur.  Awaiting sunrise, taking photos of the multiple reliefs which tell the story of Buddhist philosophy and principles, and the amazing engineering of this 9th century temple. This is considered one of the world’s seven wonders! The Temple was built during the 9th century during the reign of Sailendra Dynasty. This is a monument (not a temple you go inside). 504 Buddha statues are part of the Temple. A shrine to the Lord Buddha and a place for Buddhist pilgrimage. This is Indonesia’s single most tourist attraction.

Evidence suggests that Borobudur was abandoned following the 14th-century decline of Hindu kingdoms in Java and the Javanese conversion to Islam. 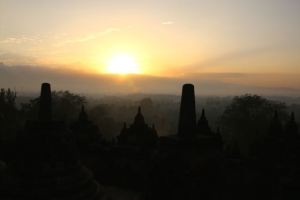 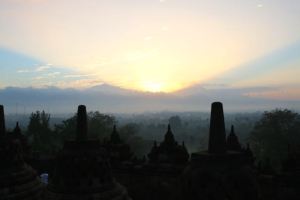 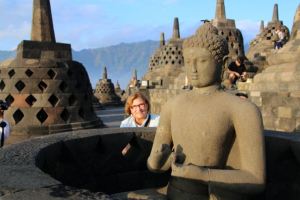 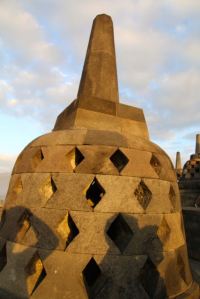 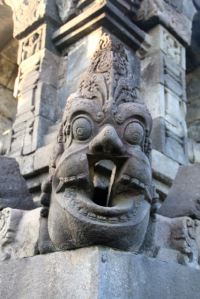 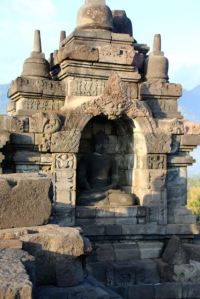 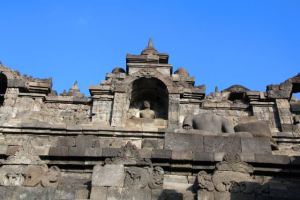 Two amazing facts: This Buddhist Monument/Temple was overgrown with vegetation significantly damaged with sunken portions when re-discovered.  Sir Thomas Raffles 1814 — first sparked world wild knowledge of its existence. It took years to discover and reconstruct this Temple…no blue prints were available– a huge puzzle to put together.  The largest restoration was done between 1975 -1982.

Second amazing fact: Diann made it up the 99 steps!  The beginning step is taller in each section (one must work harder in beginning of controlling desires) — gradually the step is less steep.